Nobara Yukinokouji (雪小路野ばら Yukinokōji Nobara) is the partner of Sorinozuka. Her youkai form is a Yuki-onna (snow woman). In her human form, she wears glasses and it seems to love fashion and girls. In her youkai form, she wears a long kimono. In her free time she likes to read adult magazines with beautiful women in them, and she shares and discusses those moments with Sorinozuka.

She survived the attack by the enemy youkai. However, afterward, she became so obsessed with finding out where they went that on one of her investigations, she somehow died. She was reincarnated and is currently a middle school student.

Nobara has long cream-colored hair with sky blue–coloured eyes. She has a slender, curvaceous figure and large breasts. She wears a white collar shirt with a black mini vest over it. She also wears a pair of black gloves and normal skinny black pants and heels.

When Nobara is in her youkai form, her clothes change to a white kimono with sky blue outlines and a dark blue Obi. She wears a black Geta and a white-ish transparent silk on top of her head. It also appears that she does not need to wear glasses in this form. Her youkai form is known as the Yuki-Onna (snow woman).

Nobara is Sorinozuka's Secret Service agent. They seem to go well with each other. Although, there are times where she considers him "disgusting" and would rather have a female partner instead. In the final chapter, he is proposing her.

Nobara and Karuta seem to get along very well. She loves seeing Karuta eat and she always tries to feed her by asking her to say 'aah'. In one episode Nobara was very concerned for Karuta when she wasn't in the building, but it was later found out that she was perfectly fine. Karuta sees Nobara as an older sister figure. Karuta is one of the only girls Nobara flirts with next to Ririchiyo and Chino.

When Soushi first introduced Ririchiyo to Nobara, she said that she wanted to get along with Ririchiyo "in a sexual way". She asked Ririchiyo if she could slip one hand into Ririchiyo's knee socks so she can feel her thigh. Although, when Ririchiyo got into a fight with Soushi, she comforted Ririchiyo and offered to be her Secret Service agent.

Nobara has a rather "icy" personality (pun intended). Much of the time, she exhibits a very focused and straightforward demeanor, although she will occasionally participate in some of the group's silly antics from time to time. Perhaps her most defining trait is her love for younger girls, an obsession that is often considered unsettling by others, particularly Ririchiyo. She dislikes men intensely, and has a tendency to shout, "MANIAC!" when annoyed or around an attractive girl. However, below her seemingly cold or detached nature, she truly cares about her friends and possesses a much kinder side, as shown when she offers to help Ririchiyo and be her new Secret Service agent. Shes very flirty when it comes to younger girls like Ririchiyo Shirakiin

Although she is frequently angered by him, she is on good terms with Renshou and is mentioned to sometimes share her adult magazines with him.

Nobara's youkai is a snow woman. She protects Renshou from harm as her job states. She looks like a young woman any guy would die for to go out with, but she has absolutely no feelings for men at all.

In Part 3, all of the residents got a letter from their reincarnated selves, saying what will happen in the future if they don't stop the attack. All characters are currently the same ages as before. 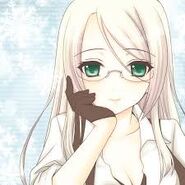 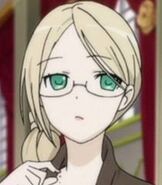 Nobara Party outfit
Add a photo to this gallery

Retrieved from "https://inuxbokuss.fandom.com/wiki/Nobara_Yukinokouji?oldid=8866"
Community content is available under CC-BY-SA unless otherwise noted.