Karuta appears as a young, slim teenage girl with salmon-pink hair tied in pigtails, and eyes with a similar color. Her uniform consists of a dark black coat and pants, with a gray undershirt underneath and red or blue tie.

In her reincarnation at the age of twenty, she has shorter hair that reaches down to her neck. She still wears a similar blazer she had in her past when working as a Secret Service agent.[2]

Gashadokuro are believed to be created by gathering the bones of people who have died of starvation. This could be a hint to why she eats so much.

Karuta appears as a very quiet, emotionless girl that is generally seen with food in her mouth. Being Kagerou's SS agent, she is loyal to him as all agents are and doesn't mind at how he treats her as long as she's given food to eat.[3] Despite her seemingly unfeeling persona, she shows great concern for her friends such as Ririchiyo and Banri, and won't hesitate to assist those she cares about in their time of need.[4] Additionally, she has cried on four occasions—when Watanuki's reincarnated form promised to keep being with her, when Watanuki goes to save her from her household, with Kagerou, and when Kagerou had allegedly died. She also enjoys eating, almost to the point of obsession, and can normally be seen snacking on many kinds of food.

After her reincarnation, she's depicted to be more cheerful, though retains her somewhat detached self.[5] She still has the tendency to eat a lot, although not as often as her past self indulged in.[2]

Watanuki has been friends with Karuta ever since they were little. Their relationship was described as "more than friends, but less than lovers".[4] Watanuki is in love with Karuta, but Karuta seems to not realize it, although she does reciprocate his feelings with intimate gestures and small hints (which often cause Watanuki to blush).

Karuta does show true care and concern for Watanuki, such as when he got into a fight for defending Karuta being called "weird" by other male students and afterwards she visited him to the nurse office to confirm that he wasn't hurt. The cause of those events was when she had left after a small cat was stuck on a tree branch during gym class because it had reminded her of Watanuki.[4] She missed him very much when he was out training and was happy when Watanuki came back.[6] They were shown to make a good team when they were partners against Nobara and Renshou and Ririchiyo and Soushi during the competitions.[7]

Watanuki is especially protective about Karuta, which was first displayed when it was revealed he had gone away for some time to train in order to be a person that could protect her. He also was quick to run to her when she had gone missing with Kagerou, and was dismayed at her obedience with Kagerou's collar.[3] When it was announced that Kagerou had allegedly died, he was the one to console her by embracing her alone in her bedroom.[8] At the end of the manga, it appears that they started dating.

In their reincarnations when Watanuki is a second-year in middle school and Karuta is a twenty-year-old woman, she performs as a playful caretaker. She treats him like a child, giving him food that would allow him to grow and calling him too weak to be a delinquent. However, this is all done in a light, playful manner. She goes as far as to apparently "kiss" him on the cheek (by Watanuki's definition) when he has food stuck there. He's often frustrated by her actions, and accuses her of thinking of him as a weak due to her easily dominating him; his embarrassment is confused by Karuta of him not wishing to be friends with her anymore, hurting her feelings. All in all, similar to his past self, he wants to protect her rather than be the one being protected.

She became official friends with Ririchiyo after the latter offered her some food when Karuta was hungry, since she had eaten her lunch in the middle of class.[4] She seems to genuinely care about Ririchiyo (similarly to how she cares for Watanuki), which in turn is reciprocated by Ririchiyo, as shown when she had fretted over Karuta's absence in school.[3] Moreover, Ririchiyo was the one to try and contact Karuta after Kagerou's death to see if she was fine, contradicting Ririchiyo's seemingly introverted and self-concentrative nature.[8]

Kagerou was Karuta's master in Part One. He treated Karuta like a pet, as he likes tying her like a dog due to his sadistic personality. Karuta doesn't seem to mind at all, and it is later described that their relationship was "instinctive", without any true meaning but it wasn't disliked by either of the two. After the announcement of his death, Karuta had burst into tears.[8]

During the reincarnation in Part Two, it's shown that Kagerou remains friendly towards her in the reunion as he offers her meat across the table that he "cooked over the flames and coal for her". Additionally, he still refers to her as a slave despite her being an SS agent for Watanuki.[2]

In his apparent "death" in Part Three, she had went so far as to protect his coffin. She tells Watanuki that he was kind and fun, praising Kagerou for his ability to cause everyone in the room to become lively. Karuta adds that she had known him before becoming his SS agent, with him meeting her because he liked her sadistic eating ability.[10] She was shown to be brought to tears when it was revealed he was alive and had faked his death, immediately embracing him.[11]

As children, both her and Watanuki disliked the youkai forms they were given and complimented each other's form, with Watanuki pronouncing her form as strong. She envied Watanuki because his form was cute, whereas hers was deemed terrifying by her friends. After quarreling with her friends and accidentally transforming, she vowed to "store her feelings far, far away" in order to prevent such an incident from occurring again.[12]

Near the end of Part One, she was attacked and possessed by enemy youkai who began to use her for their own purposes. She asked Watanuki to kill her, as she could never return to human form. Watanuki yelled to her and told her that he would still be by her side, no matter if she couldn't return to human form. Although she was so happy to hear these sentiments, she was completely taken over by the enemy and was forced to be killed sometime after the raid.

In Part Two, she has been reincarnated, and is currently 20 years old. She now has short hair, and her breasts are bigger than in her previous life.

In Part Three, all of the residents receive a letter from their reincarnated selves, saying what will happen in the future if they don't stop the attack. All characters are currently the same age as before. 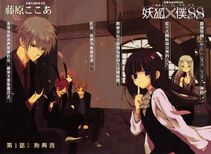 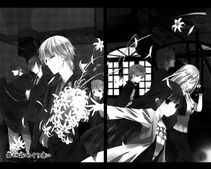 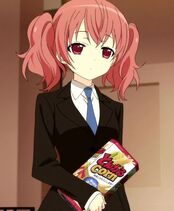 Add a photo to this gallery

Retrieved from "https://inuxbokuss.fandom.com/wiki/Karuta_Roromiya?oldid=8951"
Community content is available under CC-BY-SA unless otherwise noted.