Banri Watanuki (渡狸卍里 Watanuki Banri) is a mixed-blood tanuki youkai (raccoon dog demon). Very impulsive and outspoken, he labels himself as a “delinquent” and he is also the childhood friend of Kagerou, Natsume, and Soushi. He is in love with Karuta.[1]

Banri is a slender teenage boy, with messy, spiked blond hair and narrowed blue eyes, giving him a normally-fierce expression. His hair is pinned at the side in Part 1 and he wears a small side ponytail in Part 2. In Part 3, his hair is slightly shorter. He can usually be seen wearing a green shirt and dark pants.

Banri turns into a small brown tanuki (raccoon dog demon). He usually has a leaf on top of his head when he is in his youkai form.

Watanuki considers himself to be a "delinquent", and is quite hot-blooded. He can sometimes give off a rude or arrogant impression, but despite his insistence of the fact that he is "bad", he is frequently proven to be the opposite.[2] He is in fact very honest and cares for his friends, looking out for them and helping whenever he can, especially Karuta. Despite being smarter than he appears, he can be impulsive and tends to act before thinking, such as getting himself into a fight when attempting to protect Karuta and becoming hurt in the process.[3]

He shares a special friendship with Karuta, one that is alluded by Zange as "more than friends, but not quite lovers". He noticeably has an affection for her, as he becomes a bit embarrassed around her and stands up for her when she is bullied by others. They have been friends since childhood, according to Zange.[1]

He and Karuta are childhood friends, naturally because being demons wouldn't let them have too many human friends. Because of an event, Karuta distanced her own feelings from everyone else except for Watanuki. He has since promised himself that he'll become stronger to protect Karuta and take care of her.[4]

He always puts her first in terms of importance and can stay worried for her sake for hours if he doesn't hear that she is okay. He has tried to show his feelings to her but Karuta ends up misunderstanding him. Karuta and Watanuki end up dating at the end of the manga.

Zange is Watanuki's personal SS agent. They often quarrel, and Zange's eccentric yet cheerful personality often grates his nerve while he tries to act tough and calls himself a delinquent. Watanuki had blamed Zange for not foreseeing Karuta's disappearance, but later on showed deep concern over his health when Zange overused his powers to track Karuta's whereabouts. It is later revealed that Zange hid his frail health condition from him because he wanted Watanuki to be happy and not worry about him. Nonetheless, Zange does genuinely care for Watanuki, and acts as an elder brotherly figure to him.

In chapter 45, Zange believes that the 'key' to stopping the cycle of death was brought about by the twist of fate that is Watanuki's chance meeting with Mikoto.

Watanuki and Ririchiyo are friends, to which Ririchiyo never fully admitted, and to which Watanuki often dismissed as him being a delinquent. Ririchiyo often teases him for being the opposite of what one would consider a delinquent due to Watanuki's honesty and diligence in his grades.

Watanuki sees Soushi as a rival, though it is one-sided. He despises Soushi due to the latter calling him “cute”, and for not interfering with Kagerou and Zange's harassment. However, in their reincarnation, Watanuki deeply admires Soushi for his strength.

Mikoto is the one behind the attack on the atavists of Maison de Ayakashi, thus the one truly responsible for Watanuki's death in Part 1. They become friends in Part 2 after Mikoto saved Watanuki from actual delinquents. Their meeting was completely unexpected and coincidental. Watanuki thinks Mikoto is very strong and cool. Mikoto treats him as an underling. He likes to order Watanuki around - usually to buy drinks for him or to have dinner with him - and expects to be obeyed. Despite all this, it is hinted that Mikoto truly does treasure Watanuki as a friend.

He has a butler, Musashino, who still cares for him. One day when Musashino came to collect his lunchbox at Ayakashi Kan, he explains to the tenants that Watanuki was an exceptionally good kid. He proclaimed once that he wanted to be a doctor because of Musashino's condition, and when there was a maid who was sensitive to the cold, he claimed that he would build a house in Africa just for her. Thus when he met Karuta, he exclaimed that he was a delinquent just so that he could protect her while being strong.[4]

During his childhood he was made fun of by Kagerou and Zange during playtimes by toying with him in his tanuki form. He had since held a grudge by the memory, and blames Soushi for standing by and misleadingly calling him cute.[5]

Near the end of Part One, he tries to convince a possessed Karuta that he will be by her side, even if she can't turn back into human form. Although she cries in happiness, she is unable to override the enemy's control, and Karuta as a person is completely erased. He chases after her, but is killed in the battle between the Maison de Ayakashi inhabitants and the enemy youkai at age 16.

At his reincarnation in part two, Part Two he is a middle school student, but has no recollection of the events in Part One, much like Ririchiyo and Sōshi. His SS agent is now Karuta Roromiya, and he is the youngest of all the residents.

In Part Three, all of the residents got a letter from their reincarnated selves, warning what will occur in the future if they do not retaliate against the attacks. All characters are currently the same ages as before. 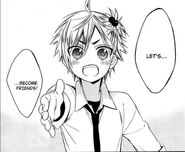 Let’s be friends, Mikoto
Add a photo to this gallery

Retrieved from "https://inuxbokuss.fandom.com/wiki/Banri_Watanuki?oldid=8991"
Community content is available under CC-BY-SA unless otherwise noted.